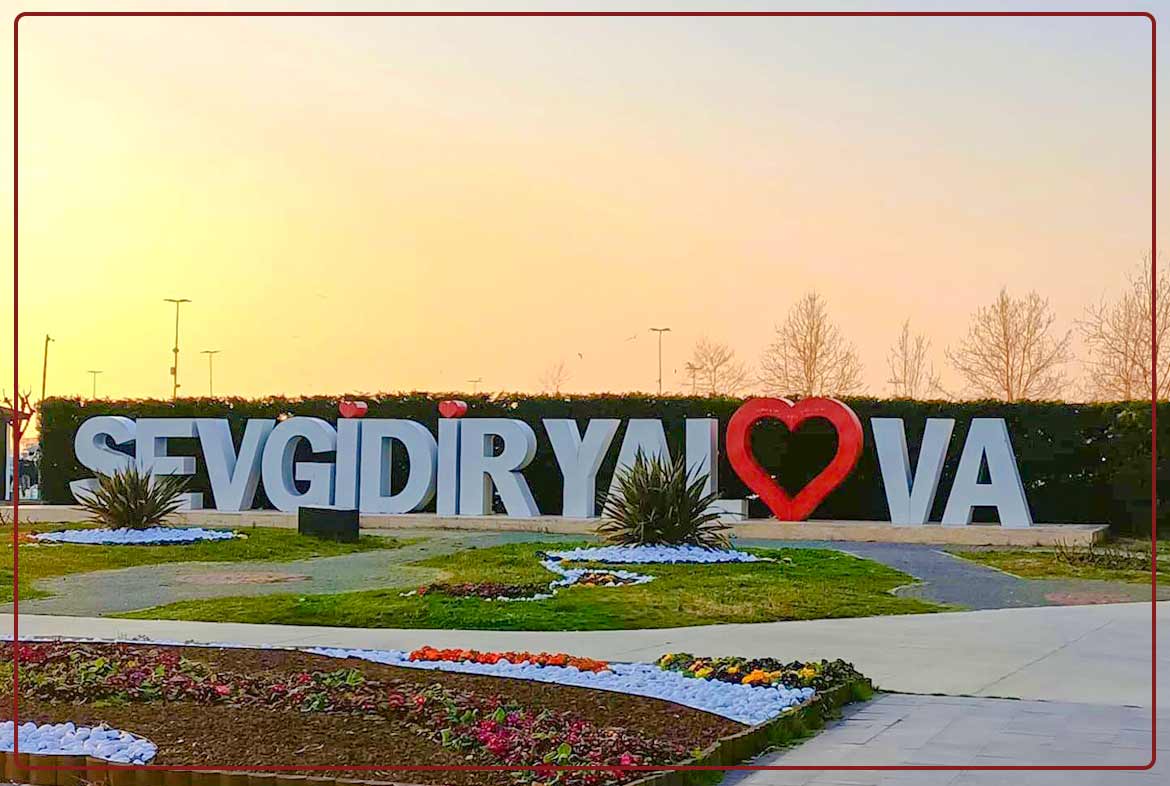 The city of “Yalova” in northwestern Turkey is one of the most important tourist cities in Turkey, in addition to that, it has become one of the cities that receive the attention of the Turkish government.

Yalova has many advantages, making it among the tourist cities in Turkey, like its strategic location, its distinctive climate in summer and winter, in addition to its charming nature and attractive landscapes, which made it on the list of tourists wishing to travel inside Turkey.

Where is Yalova located?

One of the most important things that make “Yalova” one of the most important cities  for tourist and investment, its proximity to Istanbul, which is about 170 km away, in addition to its proximity to Bursa, which is about 65 km away, and to the east of it is the state of Kocali, and it is about 100 km from Sapanca, in addition to its unique view of the Marmara Sea. It can be reached by sea in a journey that takes about an hour and a half, and it can also be visited by car or bus.

It should be noted that ships and sea ferries departing from the areas: Yenikapi, Kabatas, Eminonu and Bostanci, goes to yalova. There for there are many resorts and beaches. Due to its proximity to Istanbul, Yalova is called the “Istanbul Garden”, and for that it is considered one of the best places that all tourists from different Arab countries and even Western and European countries are looking for and want to visit, continuously at many different times throughout the year.

The history of the city of Yalova goes back to about five thousand years; That is, to the third millennium BC, where it was occupied by the Hittites in 200 BC, followed by the Franks, then the Kimberley, then Roman, the Byzantine, and the Ottoman in 1303 AD. And it was associated with the city Istanbul in 1930 at the behest of the founder of the Republic, Mustafa Kemal Ataturk.

The most important tourist places in “Yalova”

Among the most prominent of these tourist places :

One of the most important summer resorts in Turkey and an important destination for tourists. It is characterized by its picturesque nature and its distinctive tourist attractions. It is characterized by its clean water, its rural areas, its archaeological and historical sites, and the Delmece Plateau and Dipsız Lake. The area also includes the beautiful “Çınarcık” beaches. Which many residents of the region and even tourists with their families go to, in addition to the fact that this region is called the “Pearl of Marmara”, which is only one hour away from Istanbul, Bursa and Kocaeli.

The baths of Yalova are distinguished worldwide as a center for the recovery of diseases, the most famous of which are: the baths of Termal Province; Such as: Hammam of lead, Hammam al-Marsusa, Hammam of Sultan, Hammam of the Sultan’s mother, and Armutlu’s Hammam.

One of the important tourist attractions in Yalova, as it is an important destination for tourists, and it is close to the city of “Yalova” as it is only about 9 km away, and nature lovers can practice many recreational activities near the waterfalls that form with the most beautiful, wonderful painting of nature.

One of the most beautiful places of tourism in Yalova, which is visited by a large number of tourists annually due to its charming natural beauty, and it is about 29 km from the center of Yalova.

It is described as one of the most beautiful places near the city of Yalova, an important tourist destination for many tourists, about 12 km from the center of Yalova, and it is famous for its ancient Turkish Hammams and hot springs, in which it’s mineral water temperature ranges from 55 to 65 degrees Celsius.

It is about 12 km from Termal village, near the city of Yalova. It is characterized by its simple, beautiful and calm rural atmosphere at the same time.

Its construction dates back to the late twenties of the last century, and it is an architectural style that marks the beginning of the declaration of the Turkish Republic.

It dates back to 1929, and consists of two wooden stories, and is now used as an institute for developing field plants. Its name was derived from the incident of Kemal Ataturk’s visit to the place, where he saw a worker cutting the branches near the palace to protect the wooden walls, so Ataturk ordered the builders to move the building itself instead of cutting branches.

It dates back to the same period, and is distinguished by its dazzling green nature.

It is a building consisting of a mosque, a bathroom, a water tank, and canals, dating back to the sixteenth century AD.

It was built in the Roman era, where the pagan religion was; That is, it was not a church, but rather a water reservoir, and then it was turned into a place of worship during the Byzantine period.

It is located on the outskirts of Yalova State, near the Sodoshan Waterfall, at an altitude of 600 meters above sea level.

It is located on the road leading to Termal village near Yalova, and it is one of the most important tree gardens in Turkey.

Parish Park is a park on the coast and is called an open-air theater for holding activities and events in that park.

It is one of the most important areas for lovers of historical antiquities, as it includes many important monuments.

Why is Yalova a suitable place to live?

The city of “Yalova” has all the benefits and factors that make you consider residing and settling there. First because of its vital and strategic location in Turkey near the important cities, especially Istanbul, and the existence of distinctive educational services and the presence of Yalova University, in addition to the city’s beauty and the sea view, and the low cost of living in it compared to Istanbul, and it is also considered quieter compared to other cities, especially Istanbul, but at the same time it has become a vital and encouraging area for investment, especially in the real estate sector, according to the testimony of the “Omran Trk” real estate company, which is one of the most important companies operating in this sector, located in  “Yalova”, and every time, “Omran Turk” confirms that the city of “Yalova” offers investors promising and important opportunities in the field of investment due to the remarkable demand from Arab and foreign investors to that region.

Yalova is famous for its educational services, and one of the most prominent educational institutions is “Yalova University”, which might become the second largest university in Turkey, due to its reliance on modern educational methods. In addition to university education language is the Turkish and English languages.

What increased the importance of Yalova is its unique view of the Marmara Sea, in addition to the presence of a number of luxury homes and villas that are stationed on the coastal strip of the state, as real estate prices vary in Yalova according to its proximity to the Sea of Marmara or its proximity to tourist resorts, parks, and Green forests. Starting at $35,000 and reaching $500,000.

In addition to all those advantages, the Turkish government has given it increasing attention by supporting alot of the real estate and economic projects in the city, in order to attract more investors and business travelers and launch huge investment projects, after giving them more facilities for that.

Omran Trk and the Yalova

Since its establishment in 2016, Omran Trk Company in Yalova has raised the slogan “Successful Investment in the Heaven of Earth”, to be the beginning with successful projects that caught the attention of investors and businessmen from various Arab countries.

Omran Trk was able to leave its mark on the Turkish community within a short period from its establishment, and this was praised by the governor of the state of “Yalova” Muammar Erol, who said that “investors will not regret investing in your projects, and the fruits will be reaped in the end, and the return for Yalova will be good and outstanding.

Omran Trk Company is keen to choose its housing projects near service, health and even tourist facilities, which provide its residents and visitors with all the services they need.

Istanbul.. “Omran Trk” participates in the most important conference for businessmen and investors

The tax number in Turkey, OmranTrk explains the importance and the process for extracting it